It's Time to Wake Up

My last two blogs have been some of my most emotional.  Continuing this same path for the rest of this month makes me sigh when I choose what I want to work through next.  Only due to the high emotion is causes, but each week I purge and the part of me that hurts so much from that particular remembrance ebbs.

Natural curiosity is abundant when an event of this magnitude occurs.  Asking ,"What was like when I awoke or what do you remember as you awoke?" was and still is a dominant inquiry.  Here it is as "I" relive it.

Six-thirty.  There were no sirens that I could hear.  I started to wake just like the actors do in the movies.  Trying so hard to pry my eyelids open.   Feeling as if they had weights hanging from them.    They blinked dramatically slow.   Fogginess obscured my mind and focusing was minimal.  I had no idea where I was or what had transpired just moments before.  When my eyes could focus, I ascertained I was looking out my drivers side car window, but there was no glass.  I believed I was looking at a hillside of grass.  It was at the level of my window and I could only see in black and white.  When our car finally stopped spinning  after the impact, we circled to a gridlock in a ditch along side of the rail road tracks. 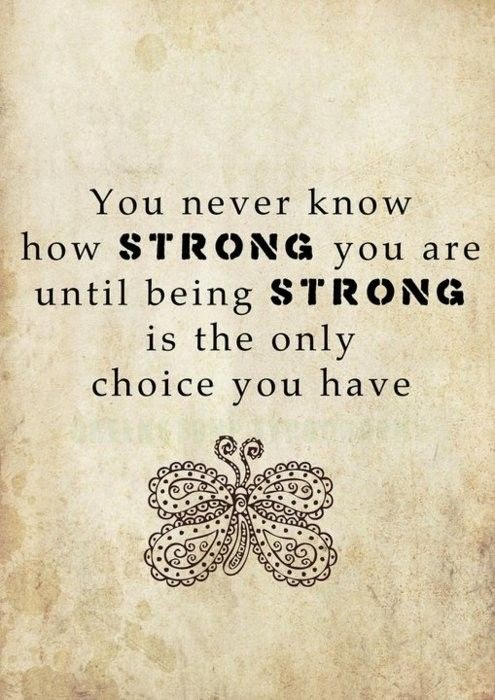 I was trying to make sense of what I was seeing when I heard what I thought were people yelling at me.  Where was that coming from?   Did I hear, Mommy?   It had to be the girls, they were both calling my name, begging me, "Please wake up, please!" "Are you okay?" they demanded .

Words finally penetrated through my lethargic mind.  "Mommy, I think I broke my arm", the oldest said softly.  Broke her arm?  What is she speaking of?  It started coming back to me, creeping ever so slowly into my confusion.

Dear God, we were in a crash!  I knew it had to be terrible, there's no way we couldn't be hurt after a crash like that.   Her voice was trembling as she stated again, "Mommy, I think I broke my arm."    I thought I knew how strong I was until I heard the pain in my children's voices.

I  turned my head towards her voice and my movement seemed unusually delayed.   There was only darkness with a white light in the upper left corner of my vision when rotating my head to the right.  Why couldn't I see them?   I knew my eyes were open, I had just been looking at grass.

I was desperately trying to get the words that were in my head to reach my lips.  I needed to give them reassurance.  I spoke softly to them, " Calm down, people will be here to help us soon.  Call 911."  Only partial words were coming out, but they understood enough to take action.  She grabbed her cell phone from her pocket and called for emergency help.

Again I tried to move, to help the girls and yet still I couldn't see them.  Something was so close to my chest, it wouldn't let me turn either direction and the lower half of my body wouldn't move.  I was trapped and couldn't understand why my body wasn't feeling any sensations.  The shadows kept trying to envelope me, they were breathing down my neck.  I fought for consciousness every moment.

I heard the youngest say in a small voice, " Carey, I think I'm cut on my belly pretty bad."  My heart sank as I wondered what injuries they had sustained.  My little angels were suffering.  I tried to ask her if she could see the cut.  She then stated confidently, " No, no I think it's okay" then just mere moments later, the worry is back in her voice as she whimpered, "No, Carey, I think it's pretty bad."  To hear her tone and the way she is dramatic one moment, then nonchalant the next, it is just so her.  I don't know how humor could show it's face in my drowsy mind at that moment, but it did.  Even though my heart was aching for the girls, it let me know her personality was still intact.  Their speech was coherent, this let me assume they did not bear brain trauma.  I did not hold this same confidence with myself.

I instructed the girls to call Dad.   A woman took my daughters phone to finish the 911 call. "My  phone is in my purse" I whispered.  Again the youngest asked with all her sassiness " Where the heck is that?"  Again a small smile entered my mind at her.  I told her it was on her floorboard before the accident.  Luckily it lingered at her feet.

I was so proud of these two girls.  They really did stay calm in light of what they had just been through.  The oldest took charge of getting us help. She was calm with the 911 operator and in relaying details to my husband about where we were located.

What he must have been thinking, I can't imagine.  We had just left the house maybe eight minutes before the collision happened.

It's odd that I couldn't get my thoughts to form out of my mouth, but I had so many inside of my head.  I was worried about how badly the girls were injured.  I was frustrated that I couldn't help them.  I wanted to hold each of them tightly and whisper comforting words in their ears.  They were frightened.   I must have hit my head so hard because I just couldn't stay focused on what was happening.

As the girls ended their phone call with my husband,  I again tried to turn towards them, then the most God awful, intense pain I had ever felt, hit me in my lower legs.  Never had I felt anything so explosive in my entire life. It was completely overpowering.  Sensation had come back to my body with such severity, rating it on a pain scale was absurd.

I reached down and could feel my legs had been pinned by the car.  Debris surrounded them.  Sharpness from the broken car was everywhere.  If I could move them, even a little, maybe it would give me some kind of reprieve from the monstrous agony I was in.   Gently I tugged on my legs and they did move just slightly as my body spasm-ed with pain.  I rested my forehead on whatever piece of the car was against my chest and decided to try a second time.  Pulling just a little harder this time the waves of sickness were too much as the misery escalated me into unconsciousness.

Had I been able to think clearly, I would have understood that I should not be attempting this action.  Thank goodness they did not move because I would have caused even more damage to myself as the fractures in my right leg had perforated my skin and were now exposed. 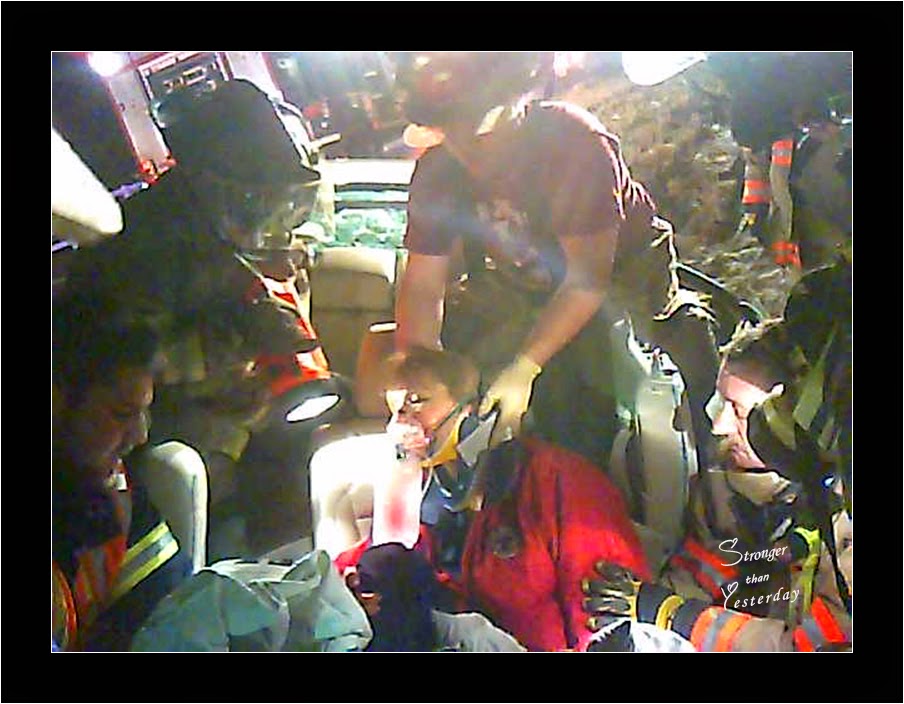 There is pain that makes you cry and there is pain high enough to make you vomit.  Then there is the pain that is so severe, your body's natural response is to send you into shock because it cannot tolerate the reactions it's feeling.

Your body is in survival mode only.

Posted by Carey Portell at 4:24 PM